Un Ponte Per… protesting on Brankov Bridge in Belgrade, May 1999.

At the time, it was known as ‘the land of broken bridges’. Because in Yugoslavia, as well as civilian victims and the devastation of towns, villages, buildings and infrastructure, war resulted in the demolition of many bridges. A total of sixty-two were left in ruins, including the bridge that was to become the symbol of this war: Mostar bridge.

Bridges were destroyed because they represented a link between communities and populations. The very same bridges that we have been working every day to rebuild over the past 20 years.

From 24th March to 10th June, NATO launched a of relentless series of bomb attacks: this was known as the “humanitarian war”, it was an illegal attempt to free the country from Milosevic’s dictatorship.

Italy was directly involved in that war, by allowing the use of its military bases and taking part in the bombing campaigns. The country was taken into war by a centre-left government lead by Massimo D’Alema.

The Movement for peace protested at military bases, in front of Parliament, and in squares across Italy: it was clear from the start that the humanitarian emergency in Kosovo was being used to mask their act of aggression.

Throughout that long war, thousands of Italian men and women stood with the war victims of all ethnic groups and religion, in an attempt to help the civilian population, deserters, pacifists and feminists who did not support the national governments.

Many young Italian men and women – including some who lost their lives – were dedicated to encouraging solidarity by creating a non-violent block between opposing factions.

We were there too.

In 1999, a month after the war began, fund-raising began for “Un Ponte Per…Belgrade”, designed to provide healthcare and send medicines and humanitarian aid for more than 10,000 displaced people. 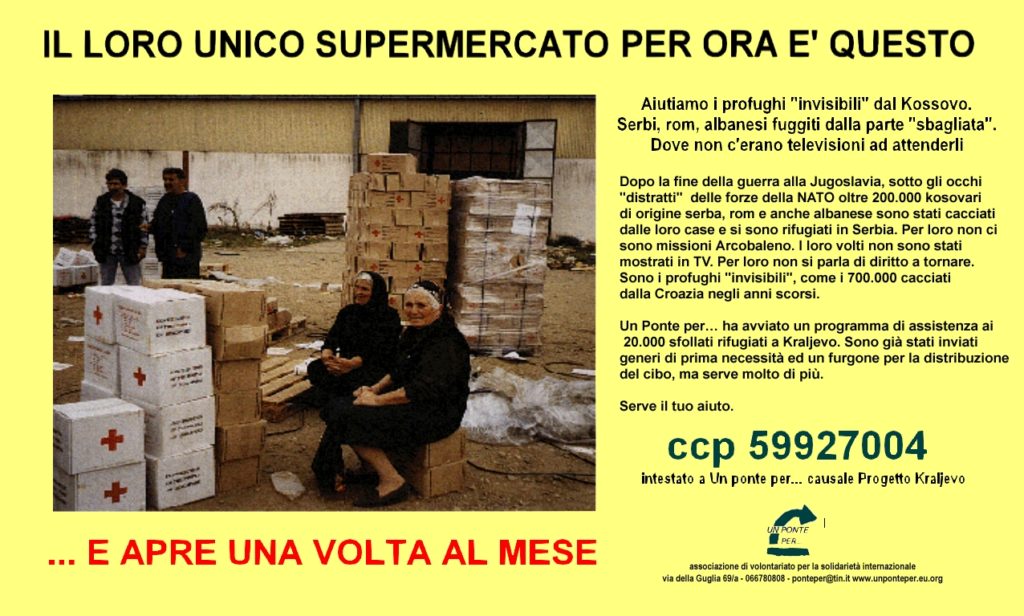 Our “A bridge to… Belgrade” fund-raising campaign launched i 1999.

The ‘Svetlost’ child sponsorship project was launched to ensure assistance and education for all the boys and girls who lost everything in the war. This project is still active and has been supporting children and ensuring their right to education for 20 years.

Our solidarity continued with our ‘Donna una serra’ (Donate a greenhouse) project, providing vulnerable families with a greenhouse to help them become generate income. And every year, we organise a “voyage of discovery” to the region.

The war lasted 3 months, and a total of 2,300 bombardments rained down on cities and villages, destroying 150 buildings, 176 monuments, 300 schools and 62 bridges.

There were 2,500 civilian victims, including 89 children. Not counting the countless others in the following years, who fell victim to radiation provoked by the use of uranium bombs.