Water, waste and reforestation to the future: sustainable governance in NES starts from the environment | Un Ponte Per

In 2017 Un Ponte Per inaugurated the program of interventions for environmental protection in North East Syria thanks to the collaboration between Italian municipalities and the municipalities of the Jazira Region. It was an exchange of skills and experiences between technicians in the sectors of water management, waste disposal and recycling as well as strategic territorial planning (ANCI program “Cities without borders”).

Undoubtedly, one of the most difficult challenges in a context of protracted crisis is in fact to imagine solutions that, in addition to intervening as immediate response to the emergency, can also encourage the resilience of the political and socio-economic structure by providing integrated and long-term development solutions. This approach is defined as “Linking Relief, Rehabilitation and Development” (LRRD) and it is the basis of the better known “Humanitarian-Development Nexus” and develops its premises by adapting the interventions to the “glocal” dynamics. These dynamics are globally originated but they intervene extensively to influence the territories locally, which are inevitably called upon to formulate increasingly localized and sustainable responses over time.

Over the years in North East Syria, the violent conflict that has hit the region since 2011 has also experienced the environmental emergency as well as a structural crisis in the political, socio-economic and security system due to the various internal and external pressures, including the control of resources and key areas for a full autonomous and sustainable development.

Water for Rojava: a campaign for the protection of water resources in collaboration with the Solidarity Economy Association and Roots for Change

In May 2021, local and international authorities raised the alarm on the criticality levels of the Tishreen dam in the governorate of ar-Raqqah. The Euphrates water basin that irrigates the region has been seriously compromised by the flow management system in Turkey, as well as by the climatic conditions that over the last year have led to an increasing lack of rainfall and consequent drought. The collapse of the dam is also having significant consequences on the functionality of the nearby Tabqah Dam whose water supplies provide electricity to about 3 million people in the NES as well as drinking water for 5.4 million people, if we consider the entire course of the river.

This situation results in highly critical humanitarian risks including the general weakening of the health system linked to water pollution, especially in the era of a pandemic of global proportions, as well as the loss of livelihoods and production activities linked to agricultural cooperatives in the areas of Aleppo, ar-Raqqah and Deir ez-Zor.

In this scenario, the Water for Rojava campaign (https://www.crowdfunder.co.uk/water-for-rojava) launched by Solidarity Economy Association, Roots for Change, Un Ponte Per and other organizations, has collected over the last year significant donations in support of women’s agricultural cooperatives (Aboriya Jin) in the Derek area. Thanks to this common action, it has been possibile to draft riqualification projects for the economic activities by promoting a more functional management of water resources (in particular of groundwater in a situation of scarcity than those of surface) as well as a path to promote the role of women in the economic system of the region.

Furthermore, a structural intervention cannot ignore the involvement and support of the local authorities in charge of managing this primary resource. In fact, the campaign has also strengthened the partnership with the Water Departments of Qamishli and al-Hasakeh districts, the latter particularly affected by the water emergency.

Gemar Zero: The cooperation program among local authorities for environmental protection. Metropolitan Area of ​​Barcelona and Autonomous Province of Bolzano committed to supporting the safe treatment of hazardous health waste and sustainable management of urban waste

Since 2019, the Metropolitan Area of ​​Barcelona (AMB) has financed the integrated intervention for the management of hazardous health waste and support for municipal solid waste recycling initiatives in the Jazira region. In particular, in the health sector, Un Ponte Per and the Kurdish Red Crescent (KRC) have played a key role in this coordination among clinics and disposal sites, guaranteeing the standards of prevention and control of infections, particularly critical during the Covid-19 pandemic. In 2020, the support of the Autonomous Province of Bolzano added value to this intervention so that it was possible to support actions for the implementation and monitoring of the correct segregation, transport and disposal of hazardous health waste. To date, the program supports over 20 hospitals and clinics with equipment and monitoring in the urban areas of Qamishli, Amuda, Maabada, Tell Tamer, Derbasiya and al-Hasakeh.

The key intervention of the next 2021-2022 program will be focusing on capacity building actions for local actors to ensure a greater ownership of the process for developing integrated health and environmental policies. This is in line with the programs of previous years characterized by training and technical support of the staff, coordination with the Department of Local Administrations and Environment and the Department of Health of the Jazira Region, as well as the supply of materials, protective equipment and vehicles.

Among the technical-operational materials within the program, two video tutorials were made in collaboration with KRC on the health waste segregation process and on the operational activities of health waste disposal sites (Health Waste Zone – HWZ)

In the sector of municipal solid waste, UPP has promoted and implemented a technical support path since 2019 when a workshop on waste management, recycling and circular economy was organized in Qamishlo to start a dialogue and the elaboration of a common strategy among civil society organizations and local authorities at all levels (komin, municipality, directorates and department). The collaboration with the A SUD association and the contribution of an international expert who went to Qamishli to facilitate the workshop was fundamental. Transversal participation and theoretical-practical approach were the central elements of this path. Both field visits in NES of international experts and delegations in Europe of representatives of NES administrations took place, including the latest in Barcelona in 2019 with the participation of 3 members of the Department of Local Administrations and the Environment of Jazira Region. 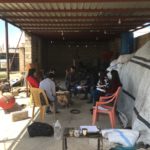 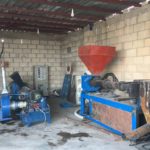 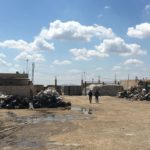 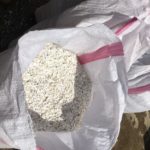 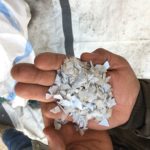 Year 2021 was again characterized by a path of collaboration and training – exchange of good practices and technical support – among European experts in municipal solid waste management and experts from the regional autonomous administration in order to develop operational solutions aimed at promoting practices of prevention, reuse and recycling. One of major themes also within the 2030 Agenda, the circular economy was the cornerstone of this program in collaboration with the A SUD association. 7 in-depth workshops took place, with the participation of 4 international experts, among them in particular a technical expert from the Metropolitan Area of ​​Barcelona, resulting in training of 10 members of municipal staff.

Within this cycle, the first municipal strategic plan for the city of Qamishli was realized, with a focus on composting plants and local plastic recycling activities, little known but of significant impact throughout the territory.

The action identified 17 private companies through a dedicated market study. All of them are engaged in plastic recycling activity in the cities of Amuda, Qamishlo and al-Hasakeh in the Jazira Region. The study found that the demand for products and services in these areas has actually grown in recent years, reflecting the resilience of the local market with respect to the conditions posed by the environmental emergency. Most of them produce secondary raw material deriving from plastic waste, thus contributing to the segregation of waste in roads and in uncontrolled landfills – often subject to fires and therefore acting as elements of pollution for the surrounding soil and air – but also contributing to the functional reuse of the materials available within the urban production cycle. The main target sector of these products is agriculture / animal technology for which irrigation and drainage pipes are produced. An interesting figure is the employment of women in these activities of about 40%.

Starting in 2022, an integrated awareness program is planned for the launch of segregation, transport and disposal system dedicated to plastic recycling but also an intervention dedicated to composting.

It is also important to mention the interest that this type of decentralized cooperation and participation interventions for environmental protection is arising among many other European local authorities: to date, some French municipalities are also initiating coordination – in collaboration with the Danielle Mitterand Foundation – all inside the JASMINES platform (Jalons et Actions de Solidarité. Municipalisme et internationalisme avec le Nord-Est de la Syrie). The goal is to promote local governance and collaboration among municipalities, to support active policies for environmental protection, the development of local economies, the recovery of soil fertility through the possibility of reforestation as planned by local actors.

All these activities are particularly relevant and are part of a longer process aimed at promoting the development of environmental protection policies in NES, considering and enhancing the good practices already existing in the field.

This is therefore an important challenge for administrations and all local civil society actors committed to guaranteeing the rights to health and to the environment of all citizens, at all latitudes.